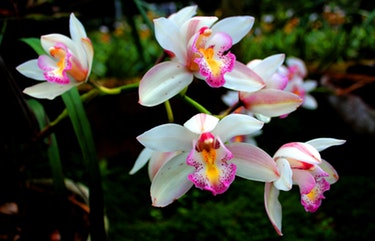 These orchids are prized for their long-lasting sprays of flowers, used especially as cut flowers or for corsages in the spring. There are several types of Cymbidiums – Standards, Intermediates, Miniatures and Pendulous. Where summer nights are warm (above 21°C), only miniatures and pendulous can be recommended, because many are more tolerant of heat and able to flower in warmer weather.

Light
Important for growing Cymbidiums. Coming from cool and bright areas in Asia, they need high light but cool temperatures. In coastal climates, high summer temperatures, especially at night, may prevent the plants from blooming. The maximum amount of light possible, short of burning, should be given to the plants. This means only light shade during the middle of the day, or about 40 percent shade. Leaves should be a medium to golden green in colour, not dark green.

Temperatures
Another critical factor in flowering standard and miniature Cymbidiums. During the summer, standard Cymbidiums and intermediate Cymbidiums are usually grown outside in semi-shade, where day temperatures should be 24 – 30°C (or more), but night temperatures in the late summer to autumn (January – March) must be 10 – 16°C cooler to initiate flower spikes. Optimum temperatures in winter are 7 – 13°C at night and 19 – 24°C during the day. When plants are in bud, temperatures must be as constant as possible, between 13 – 24°C. Miniatures and pendulous can stand temperatures 3 to 6 degrees higher than standards and intermediates and still flower. Most Cymbidiums can tolerate light frosts and survive, but this is not recommended. Bring them inside when temperatures dip to 5°C. In mild climates, they can be grown outside year-round. A bright and cool location inside is best for winter months.

Water
To provide a constant supply of moisture to Cymbidiums, which are semi terrestrial plants. They generally produce all their vegetative growth during the spring and summer and need the most water during that period. Water heavily during the growth season, keeping the potting material evenly moist. Reduce water when the pseudobulbs complete growing in late summer. Keep barely moist during the winter.

Humidity
Outdoors is usually sufficient during the summer, except in dry climates, where evaporative cooling in a greenhouse is necessary. Keep humidity at 40 to 60 percent during the winter, especially if plants are in bud. Keep the air moving to prevent fungus (Botrytis) from spotting the flowers.

Fertilizing
At the proper time to help Cymbidiums flower. During the growth season (spring through late summer), high nitrogen fertilizer is used. In later summer, use a high-phosphorus, blossom-booster fertilizer, to help from bloom spikes. Fertilize at full strength every week to two weeks. In winter, fertilize once a month.

Re-potting
Usually done in the spring after flowering, usually every two years or when the potting medium decomposes. Shake all of the old potting mix off the roots, dividing the plant if desired, Pick a water-retentive potting mix; medium-grade bark with peat moss and river sand is a common mix. Fine grade coco-chips also proves to be very successful. Select a pot that will allow for at least two to three years of pseudobulb growth before crowding the pot, while planning on placing the active growing pseudobulb(s) of the division farthest from the side of the pot. Spread the roots over a cone of the mix in the bottom of the pot and fill the container with medium, working it among the roots, tamping firmly. Single back bulbs need not even be placed in mix until new growth and roots are noted. Keep shaded and warm until new growth sprouts, and pot as above.