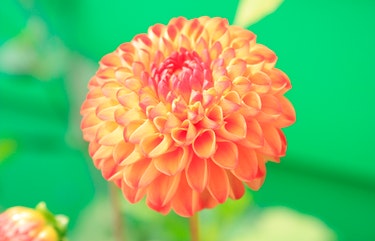 For spectacular Summer and Autumn colour, there is little to beat the Dazzling Dahlia. There are now thousands of modern cultivars available which range in height from 20cm to nearly 2m. Flower size varies from 5cm in diameter to giant decorative ‘dinnerplate’ blooms over 20cm across. Dahlias form a bright multi-coloured display in the garden or in large troughs and tubs.

Planting
Dahlias need full sun all day for best results. Plant Dahlias any time from September until November. They need well drained soil with large amounts of compost added together with a Superphosphate. Plant the tuber with its old stem or new shoot pointing upward in a well composted hole. Plant a stake behind the tubers of tall growing varieties before covering the tuber with soil / compost mixture. Avoid planting tubers too deep. Plant about 5cm below soil level. Remember to mulch. Plant short varieties 15cm apart and tall varieties 40cm apart. Sprinkle Cutworm bait and Snail bait around each tuber after planting to keep those two pests away from the succulent new green shoot when it emerges.

Watering
Keep the soil continually moist at root level from planting time onwards even though shoots will only appear above the ground after about 8 weeks. Water well every four to five days to ensure that the fine roots under the tuber receive moisture. It’s preferable to water in the morning to ensure the foliage dries off before nightfall, this reduces the risk of mildew.

Feeding
Dahlias are heavy feeders. Plant the tuber in an enriched compost/soil mixture. Use a bulb fertilizer from planting till end of growing season.

Flowering
Dahlias will give a long display of colour. Dahlias flower from Summer through until Autumn especially if they are dead headed often. Excellent cut flowers. If cut when flowers first open fully they should last seven to ten days in the vase with water changes. Apply Superphosphate during the flowering period and top dressing of well-composted manure after flowering, this will ensure that the tubers are well prepared for their next growing season.

After flowering
Allow plants to die down naturally. Dig carefully, lift and label Dahlia tubers in late Autumn (May). Store in a cool place in dry soil, river sand or vermiculite.

Pests and problems
Avoid planting Dahlias in the same bed year after year to prevent the build up of soilborne diseases. Watch out for snails – they love Dahlia flowers and leaves. Treat fungal problems with a good fungicide.