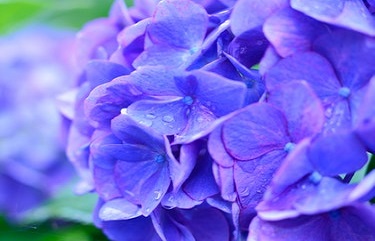 Hydrangeas are amongst the most popular flowering shrubs in South African gardens, growing well from coastal regions to the drier hinterland are Hydrangeas, commonly referred to as Christmas Roses, their showy, colourful blooms dominate the landscape through the heat of summer. Very rewarding and easy to grow if you follow these simple hints.

Where to plant in the garden
They grow best in a lightly shaded position with plenty of water. South facing slopes are ideal. Hydrangeas enjoy rich, loamy soil with plenty of compost, leaf mould and kraal manure. Soft new growth tips require protection from late frosts.

Garden uses
Mass plant under trees in large gardens. Plant amongst other shade lowing shrubs in flower beds. Use in pots and containers on shaded patios. Use potted plants as indoor flowering displays in brightly lit rooms. Plant outdoors when blooms begin to fade. Blooms are spectacular in flower arrangements, either fresh or dried.

How to plant
Soak root ball of Hydrangea in the bag. Dig holes approximately 600mm square and 450mm deep – rather wide, than deep as Hydrangeas have a shallow root system. Mix 1/3 part to 2/3 parts topsoil from the hole, mix well. Use Superphosphate OR Bonemeal at the bottom of the hole. Return the mixture to the planting hole, firming down all the time. Dig a small hole, large enough to accommodate the root ball of the plant. Carefully remove bag. Do not bury any deeper than the level of the root ball in the bag. Fill in soil and firm down well. Water thoroughly with at least 20 litres of water. Thereafter keep plant moist at all times from spring to autumn. Mulch with compost or leaf mould to keep roots cool and to conserve moisture. Mulching greatly reduces water needs.

Fertilizing
Hydrangeas are greedy plants and require regular fertilizer applications. Apply a flowering fertilizer at the recommended application rate. The colour of blooms changes according to the acidity of the soil that the plants are growing is.

Treating in the following manner can alter this: Pink or Red flowers are usually associated with alkaline or sweet soil conditions. Add 500g of Agricultural lime to soil mixture at time of planting. Thereafter dress with lime every August at a rate of between 250g and 500g per plant. Fertilize with Shake and Grow Pink Hydrangea Plant food.
Blue or Purple flowers require acidic soil conditions such can be achieved by regular application of acid compost and Shake and Grow Blue Hydrangea Plant Food.

Pruning
As the flowers of the common garden Hydrangea (Hydrangea macrophylla) are borne in summer on the old wood, pruning should theoretically be carried out directly after flowering in late January – by removing the old canes and any dead-heading of the previous year’s stems which only bore a single flower.
In practice, however, the pruning of Hydrangeas in

South Africa is most successfully carried out in winter when the leaves have dropped from the dormant plants.
By observing the plants at this time, it will be found that there are different types of wood, according to age. There are young slender growths of the previous summer reaching up from the base of the plant. At the end of this stem there is a large bud. This bud, in the next growing season, will produce a short shoot and then flower.
There are older shoots two seasons old. At the end of these stems there is a dead flower (if not removed by dead-heading) while a short distance down the stem will be found a cluster of large buds. Older, heavier stems of two or more seasons will also be found, carrying several dead flower heads, and these should be pruned back hard to the base of the plant to simulate new, vigorous growth the following season. If the entire shrub is pruned back hard to the base, or if the stems are pruned to half their length, then it is quite possible that the flowering buds would be removed resulting in a poor show the following summer.

Pest control
Powdery mildew – a white fungus on the upper surface of leaves – spray with a good fungicide.
Red Spider Mite – minute, eight-legged mite on the underside of leaves causing leaves to turn silver-grey and later brown – spray with a product that are registered for Red spider on the underside of leaves.
Chewing insects – beetles, caterpillars and grasshoppers – treat with a good insecticide.
Chlorosis – yellowing of leaves with prominent green veins – apply Iron Chelate at recommended dosage, or foliar feed with micro-elements.